Racheek: An RPG on a business card

I’ve taken a slight break from Grace because I’m now at the stage where I am thinking about play testing and tweaking final changes to rules. Given it’s tricky to organise large groups of people at the moment, it doesn’t make sense holding onto that project at the expense of trying something new. And here it is, something new.

Racheek is a super simple RPG, the rules for which fit on a business card, that you can play while traveling or in a pub or… anywhere really.

This post will explain some of the inspiration, design decisions, and nuances given there isn’t a lot of room on the card itself for designer notes, which I really like to include as part of RPG work I do. 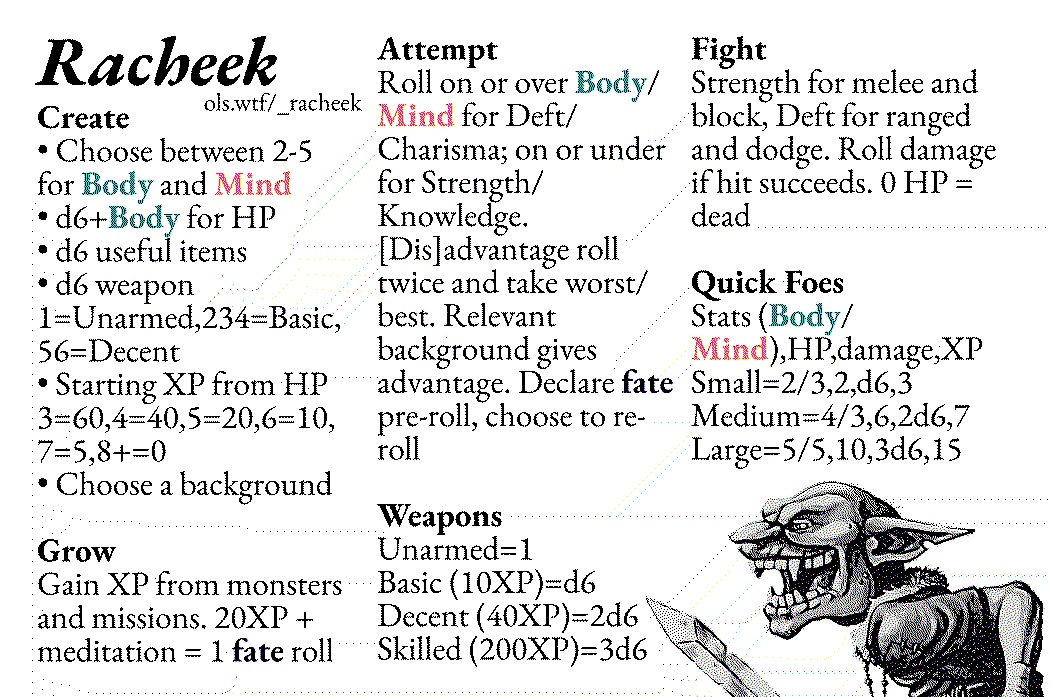 The front of the card for Racheek (version 0)

Who or what is “Racheek”?

Racheek is the name of the Goblin you can see on the front of the card. Their name and entire reason for being came courtesy of a nice square of blank space that needed filling. I would not consider Racheek a main character; they are simply one of many Goblins that wander around the forests of whatever-the-name-of-this-setting-is, preying on Adventurers to quench their thirst for gold.

Character creation is one of the most important aspects of an RPG. How are you supposed to know who or what you’re playing otherwise? In lots of games, character creation is an arduous process that can take hours (see D&D Session Zeros for example) and confuse even the most intelligent of people, and also Nuclear Research Engineers.

I really like the concept of Lasers & Feelings which sees players choose where they are on a scale of Feelings (low) to Lasers (high) and roll under/over that number depending on the type of check.

I took this further to define a scale of Body and Mind. Both are a scale of 2–5 inclusive and do not change throughout the game1. The score for Body denotes whether you are Deft (low) or Strong (high), whereas Mind represents Charisma (low) or Knowledgable (high). You make the choice about where your character sits on these scales, and adjust your gameplay to suit. For example:

This approach makes it impossible for players to “max out” their character’s stats through lucky rolls or as the game progresses, as any increase in one direction results in a decrease of the opposing ability.

The score for Body is also used to calculate the character’s starting and maximum hit points, by adding it to a roll of 1d6.

The player rolls 1d6 to find out what kind of weapon their character starts with. The options at this point are Unarmed, Basic, and Decent, and more details are discussed in the Weapons section.

A character also starts with 1d6 useful items. There is a handy d66 table on the back of the card that doubles as a way of marking inventory (just put a mark next to what you have). There’s a separate area on the Character Sheet to mark additional items as they are found. 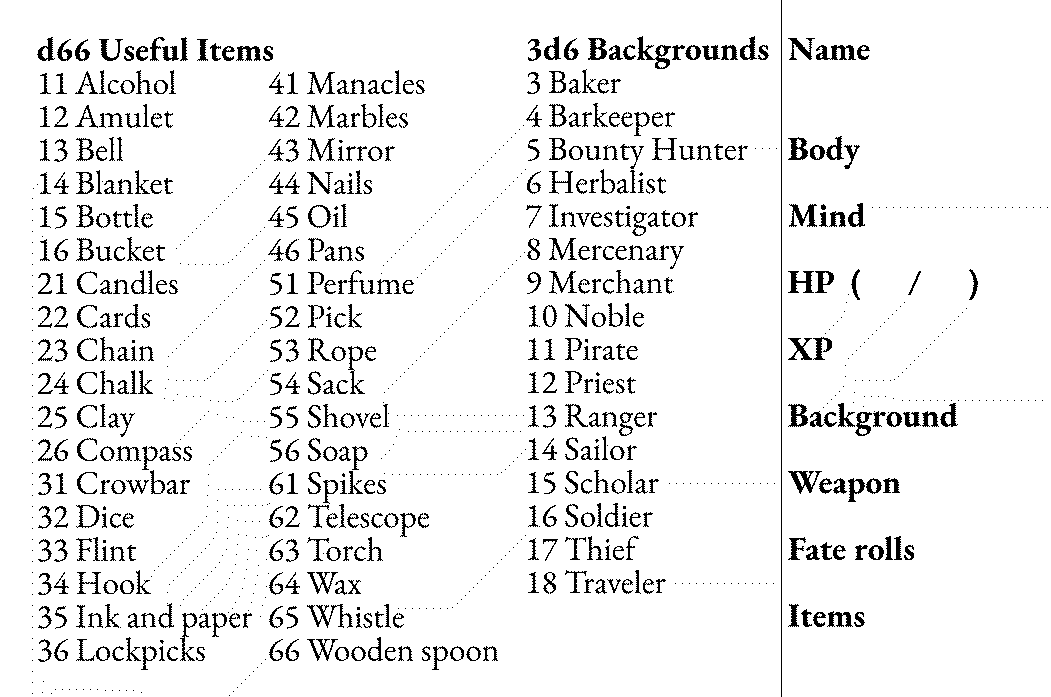 The back of the card for Racheek (version 0)

The player should also roll for (or choose if they’re boring) a background. This background is mostly for flavour, but will help give the character a personality without too much investment from the player. Backgrounds have an additional purpose in that a relevant background will give the character Advantage on any Attempts. For example, if a character has the “Traveler” background, they will roll with advantage when Attempting to locate or barter for accommodation. There is no prescriptive list of which skills map to each background, as the players and Game Master would be expected to resolve this on the fly during gameplay, or else decide ahead of the game.

A player starts with a pool of XP which is dependent on their starting HP. As the starting HP goes up, the starting XP goes down. Once in game, players can earn XP by completing quests and encounters. Loosely speaking, a quest would be 50-100XP depending on complexity, and an encounter would be 3-20XP depending on severity and how well it was handled. Players can cash in their character’s stored XP, combined with a moment of reflection or meditation, to acquire Fate Rolls, which allow the player to effectively redo a roll.

Characters may also spend their XP in game as though it were currency.

Any action that a character wants to take in Racheek that has an element of uncertainty is an Attempt. Discretion is given again to the Game Master as to whether to ask the player to roll or not. For example, drinking a glass of water would generally be an automatic success and not worth of a roll. However, if our character is handcuffed and is attempting to drink the glass of water without being heard by a guard, then you bet they are going to roll for it.

Racheek works with a roll under/over mechanic. Attempts relating to Deft or Charisma require a roll on or over the Body or Mind ability respectively. Those relating to Strength or Knowledge require a roll on or under. So our tank example from earlier needs to roll 1-5 to succeed at breaking down the door, but has to roll 5 or 6 to succeed at quietly picking the lock.

A non-exhaustive map of Abilities to Attempts is below, but go wild with your own definitions.

If the Game Master decrees that a character has Advantage on an Attempt, such as the opponent she is about to shoot an arrow at is distracted, then the player may roll her die twice and take the best outcome. Similarly if the character has taken a lot of damage, he might not be able to dodge an attack as effectively, and must roll his die twice and take the worst outcome.

If the Attempt relates to something that the character’s background would give proficiency in, such as a player with the “Herbalist” background mixing up a herbal remedy, then the Game Master may award Advantage to that player.

This isn’t an original mechanic. I have seen it in several TTRPGs previously but the one that was most recent (and therefore clearest in my mind) is Burrows & Badgers. A player can use a Fate Roll on any Attempt, as long as they declare so before making the roll. The player can keep either result. If the roll that the player makes is taken with Advantage or Disadvantage, then the entire roll should be redone.

The number of Fate Rolls a player has can be tracked with anything to hand, whether that is counters or just markings on paper. They are gained by spending XP and a moment of reflection or meditation. This mechanic is solely to stop players from collecting new Fate Rolls in the middle of battle, unless they are willing to be at a disadvantage because of said meditation.

There are three classes of weapons. Basic, Decent, and Skilled.

The actual weapon that a player has is entirely up to you as the Game Master and them to decide. Likewise, you as the Game Master are entrusted with logic around which weapons can be used for melee, ranged, and combination attacks. If you want to allow a Great Axe to be used as a ranged weapon then go for it, but might I suggest you use Strength instead of Deft and throw a bit of Disadvantage in there?

As already covered, actions in combat are simply just Attempts. When making attacks against a Foe, a player must roll melee (Strength) or ranged (Deft) in order to hit. When being attacked, they must roll dodge (Deft) or block (Strength) in order to avoid a hit. If a hit is made, then the appropriate damage is dealt. Once a character or Foe reaches 0HP then they’re dead.

Do you have a comment to make on this content? Start a discussion in my public inbox by emailing ~ols/public-inbox@lists.sr.ht. You can see the inbox here.